THANK YOU FOR AN INCREDIBLE SUMMER OF SAILING

We are deeply grateful to everyone who came sailing with us for the 2020 summer season. Thanks to clear and detailed health and safety guidelines from our state health officials, and the willingness and commitment from our clientele, we were able to have a successful, healthy and safe season that was truly like no other.

We look forward to having you aboard for the 2021 sailing season!

From our hailing port of Bainbridge Island, we offer private, customizable, sailing experiences in Puget Sound and beyond aboard our classic sailing yacht, TRUE.

Book with us and give 1% back to the planet! Learn More 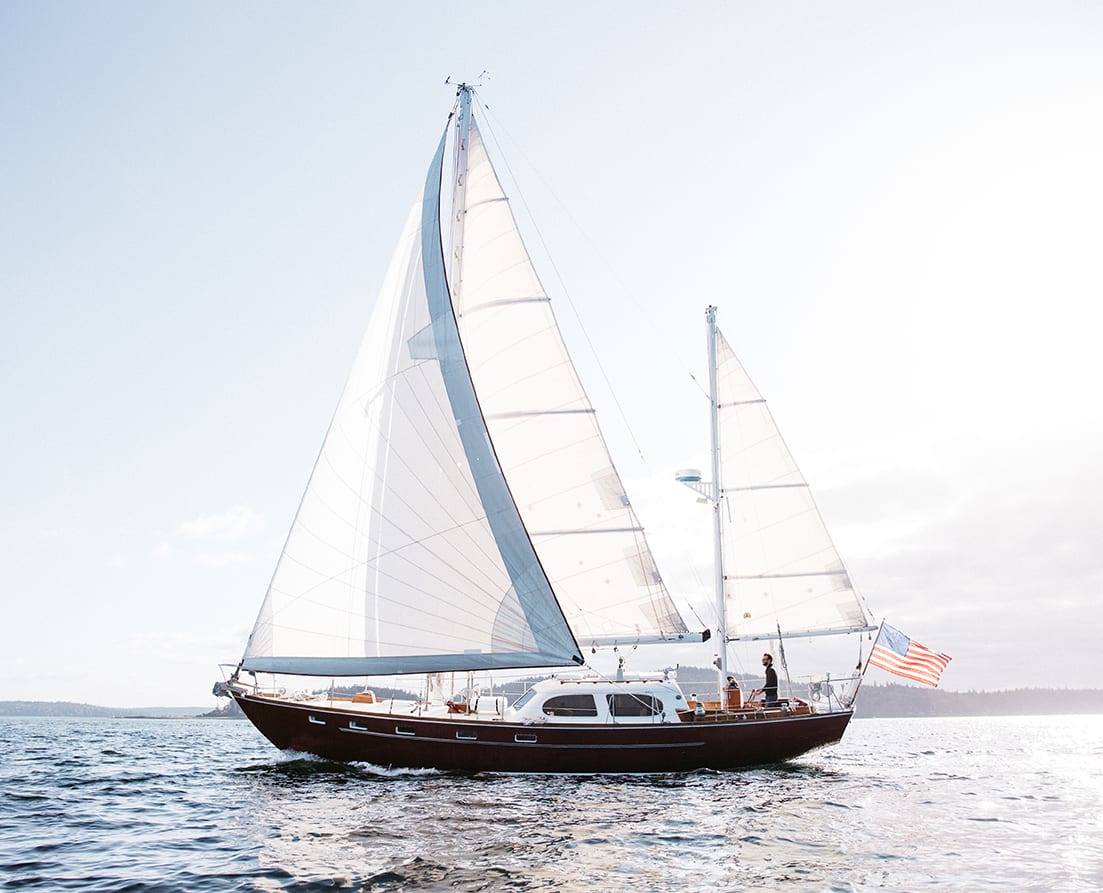 Sailing Puget Sound is an unforgettable experience.  Come aboard, we’ll set sail and soak up the panorama of these beautiful and inspiring waters. 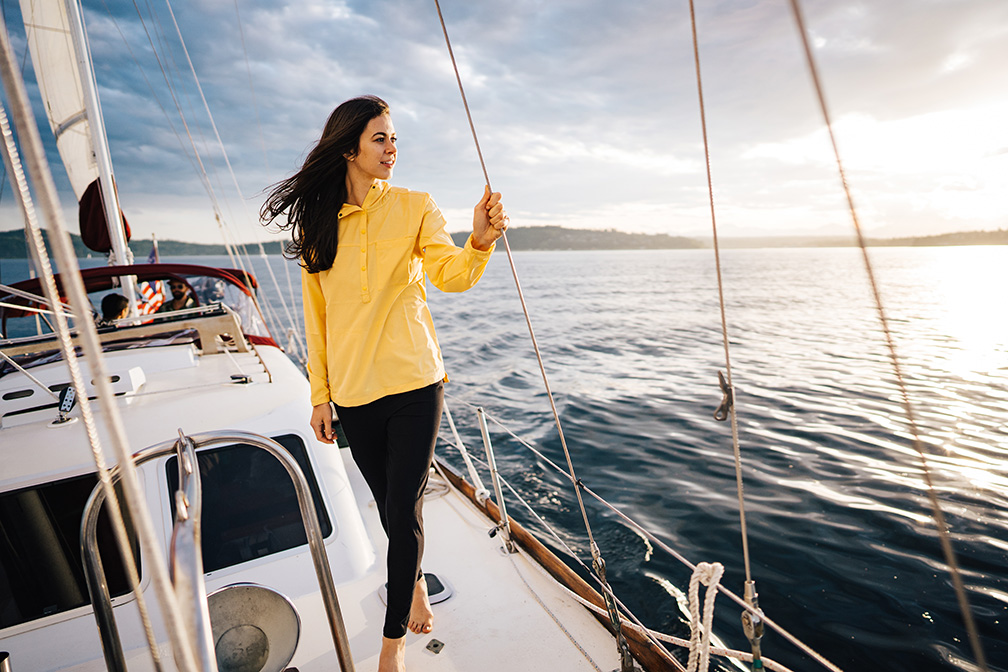 Come aboard for an elegant and romantic sunset sail. 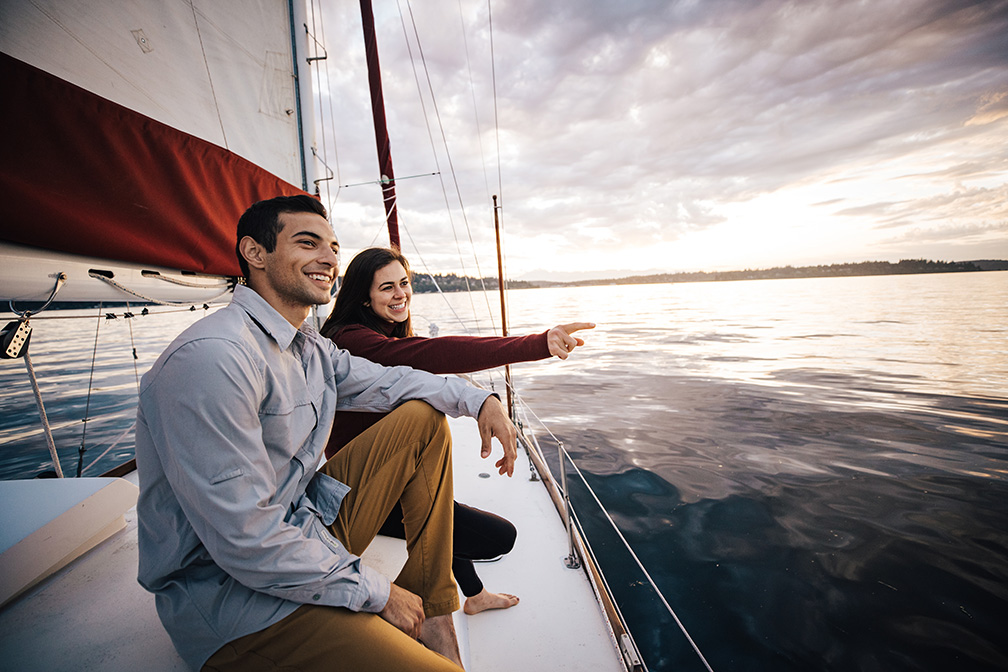 Join us for four hours of sailing and exploring.  Leave your worries behind, but bring your sense of wonder.  This sailing package provides the opportunity for more time under sail, and a great way to view wildlife. 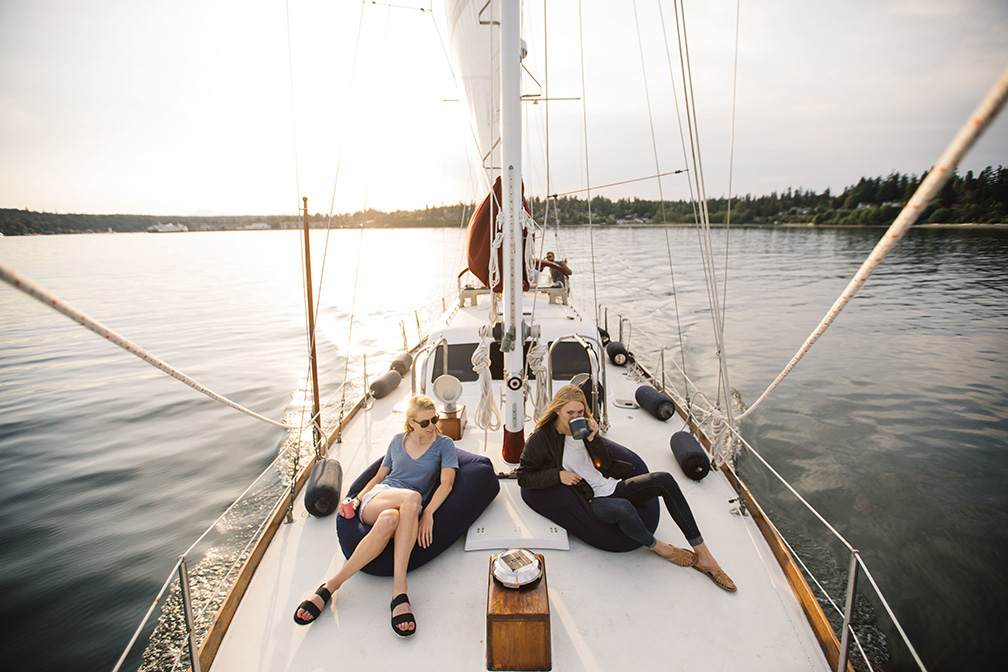 This adventure has it all – plenty of sailing, island exploration and a peaceful night at anchor in an idyllic, tranquil harbor. 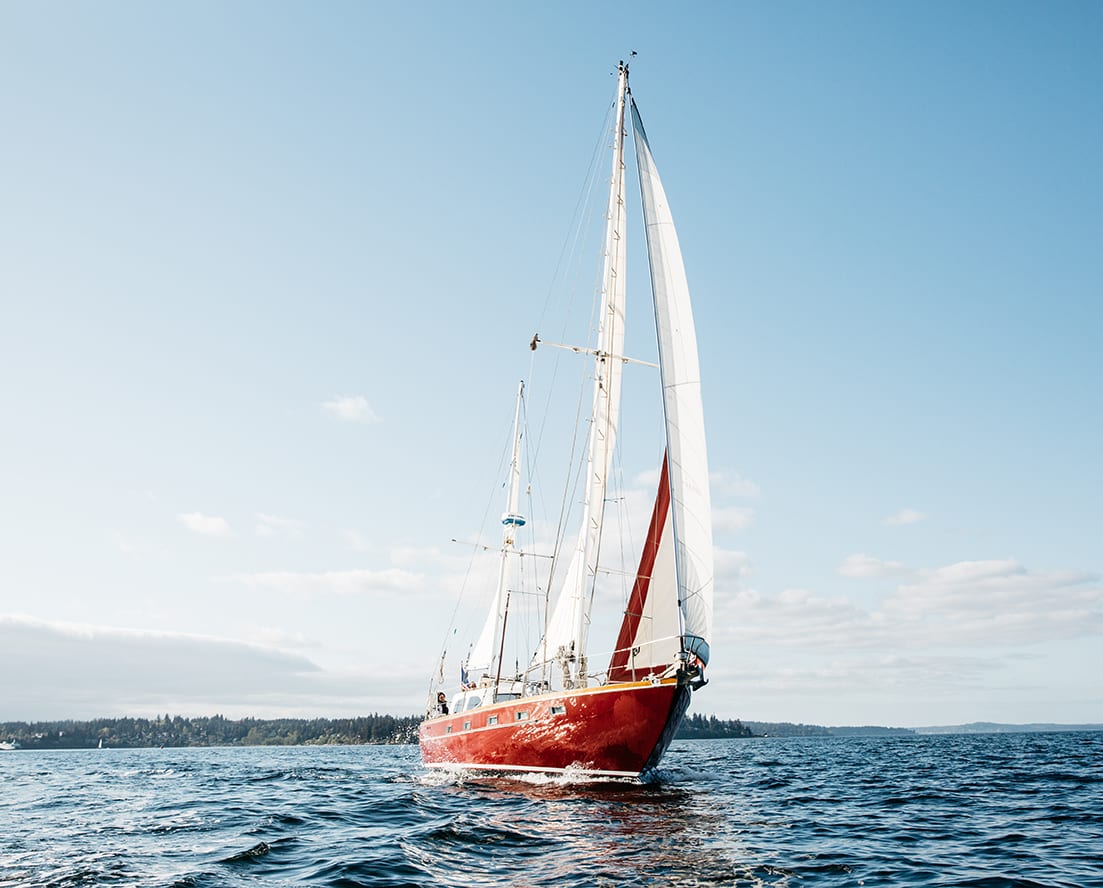 Take the whole day and settle into life under sail.  This package gives you the opportunity to learn the ropes and lend a hand with the sailing, or just relax; this is your day on the water. 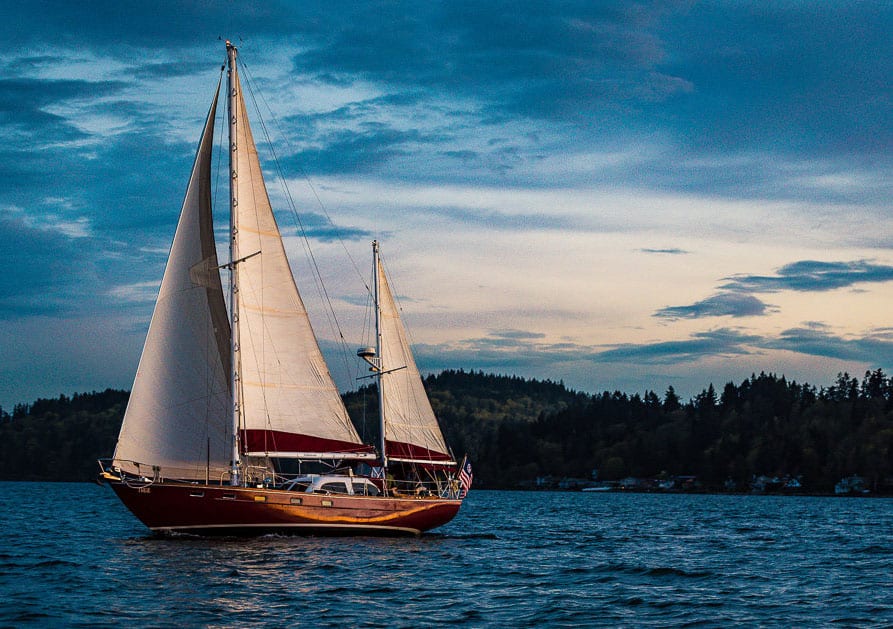 Enjoy a two hour Sunset Sail and the most peaceful, romantic night at anchor, sleeping with the gentle sway of the harbor waters. 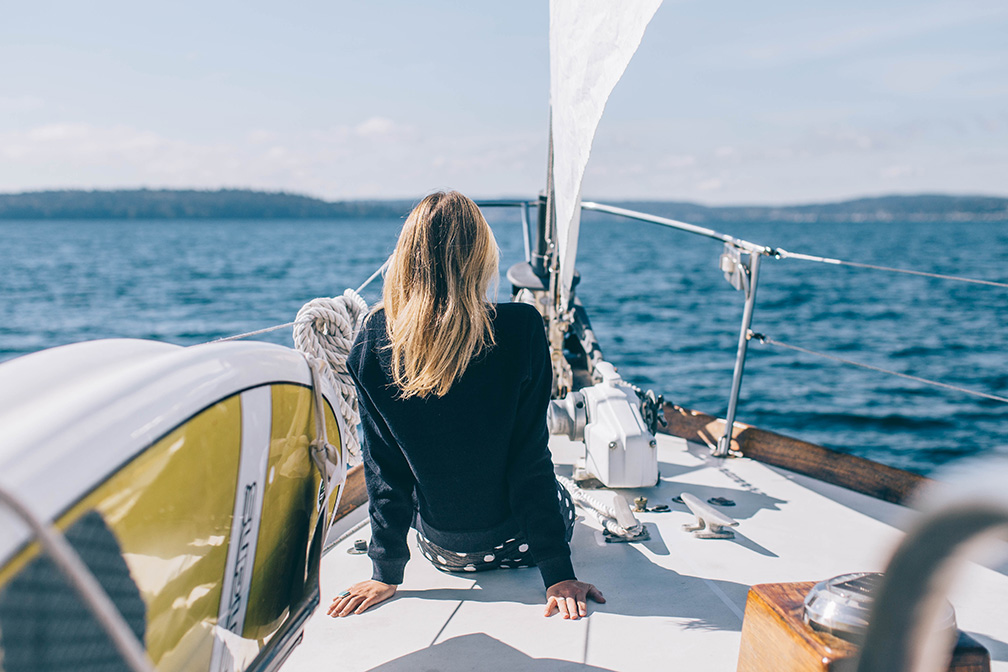 Set sail for this idyllic State Park island that is only accessible by boat.  This excursion includes adventuring ashore at Blake Island, where you can walk the network of trails through the forest, or comb the beaches for treasure! 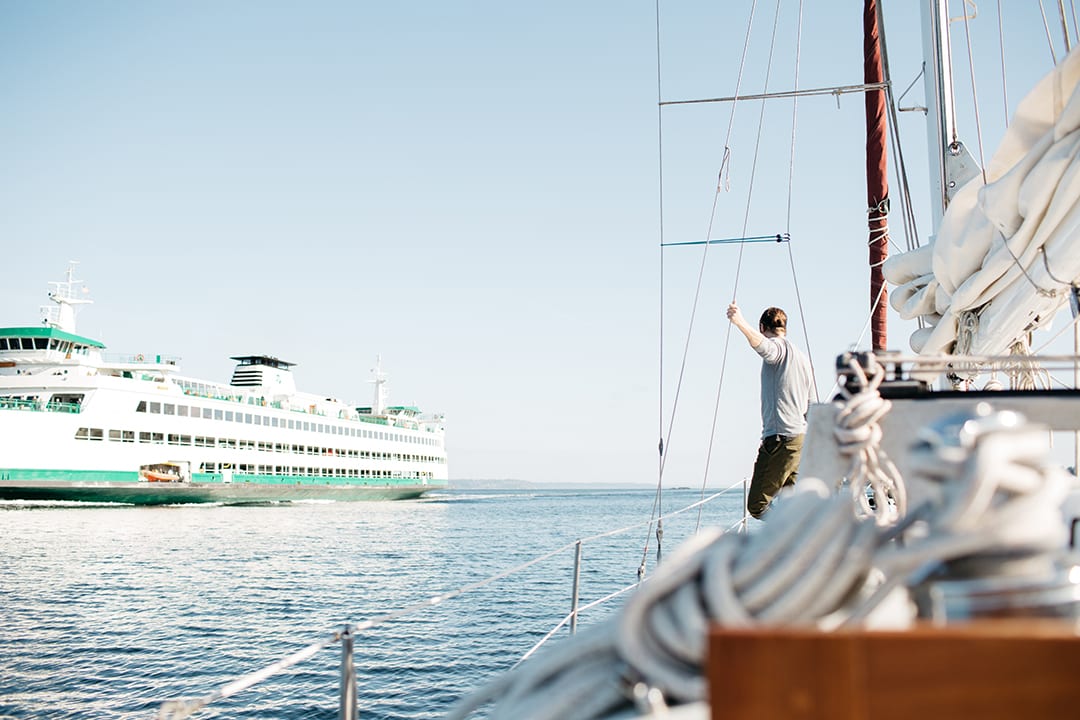 Join us for a circumnavigation of Bainbridge Island, complete with history, wildlife and shoreline exploration! 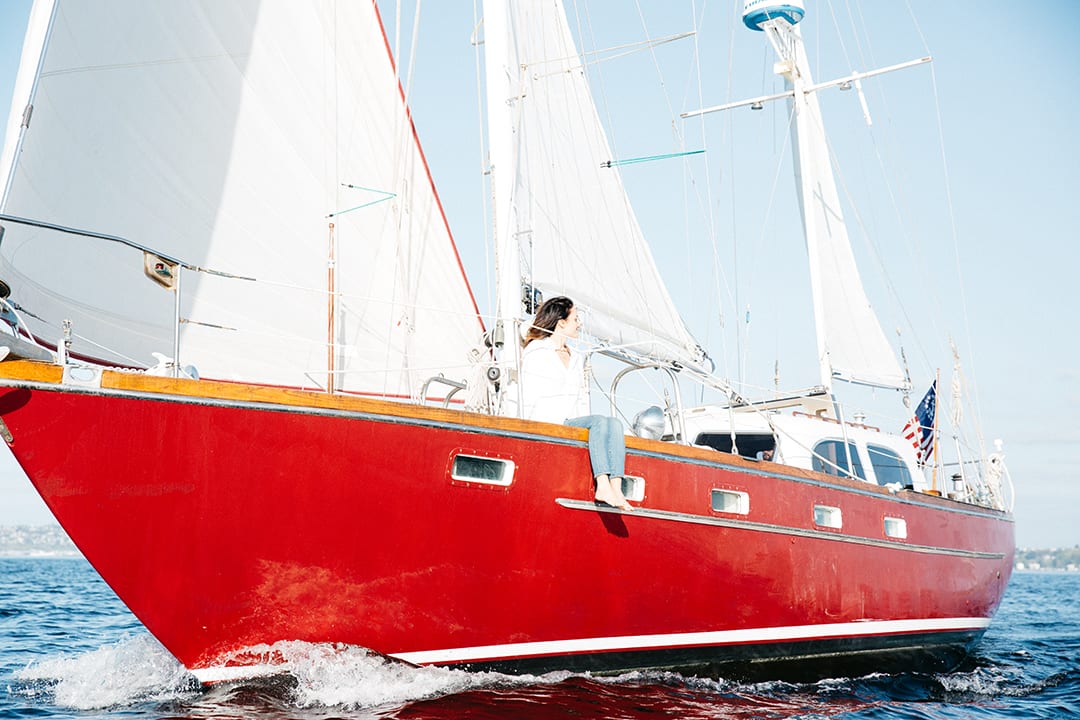 Come enjoy two full days of sailing with an overnight at the dock, all to yourselves in an enticing location.  The captain will stay ashore, giving you the freedom to come and go from the boat as you please, enjoying the charms of life on the waterfront. 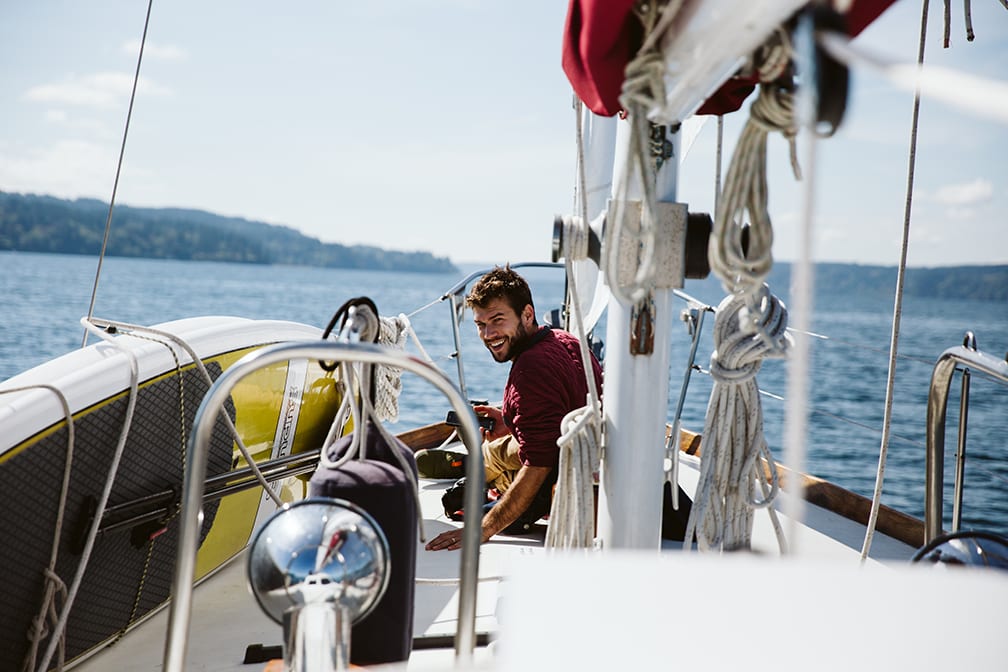 Exploring the San Juan Islands under sail is an unforgettable experience.  Join us for a six night adventure through these gems of the Pacific Northwest. 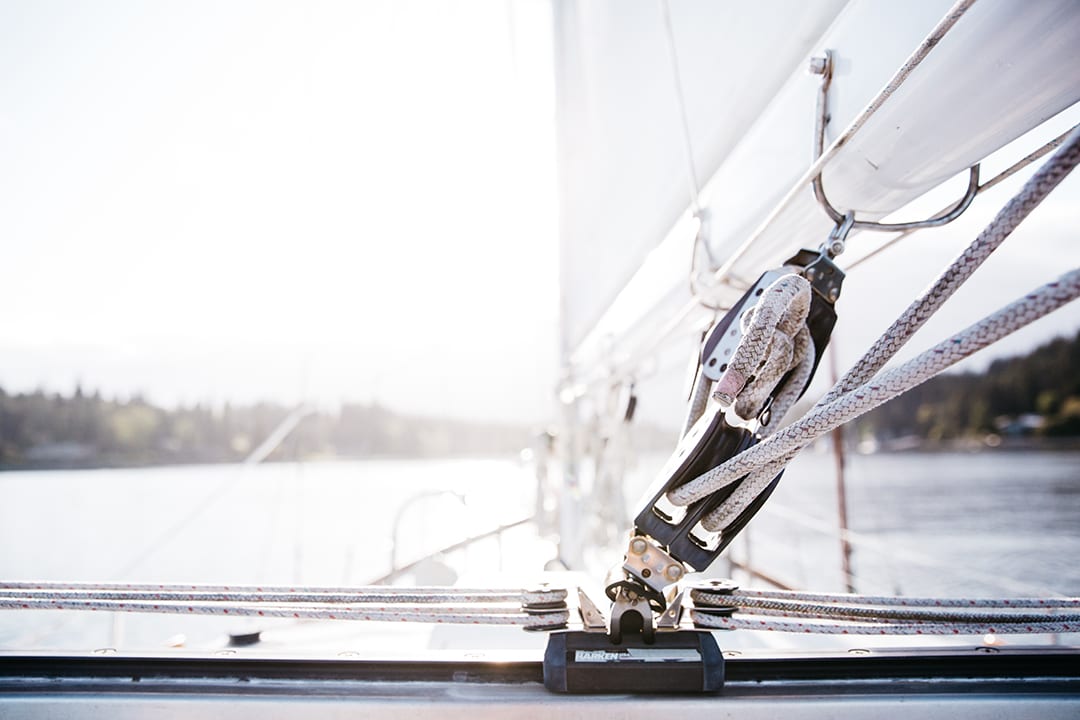 We can offer you a respectful and sacred space aboard, or transport you to a nearby destination for a ceremony or memorial.  All are welcome. 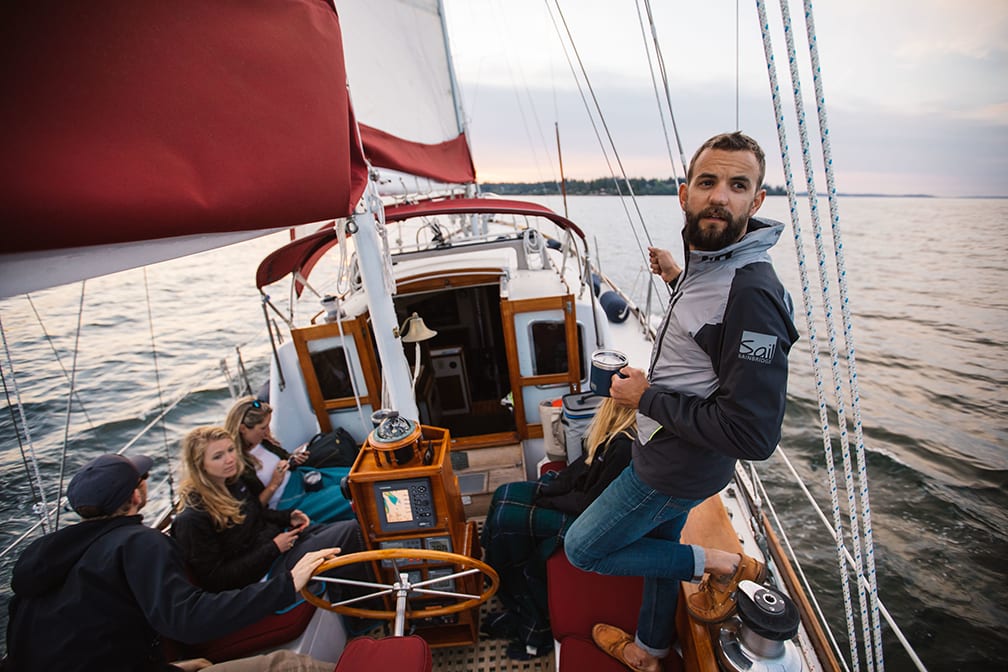 Our classic sailing vessel, TRUE, provides an incredible venue for a variety of photo shoots, with her sleek lines and teak finishes.   With plenty of room for your photography team, product line, and models, we can build the perfect sailing excursion for you. 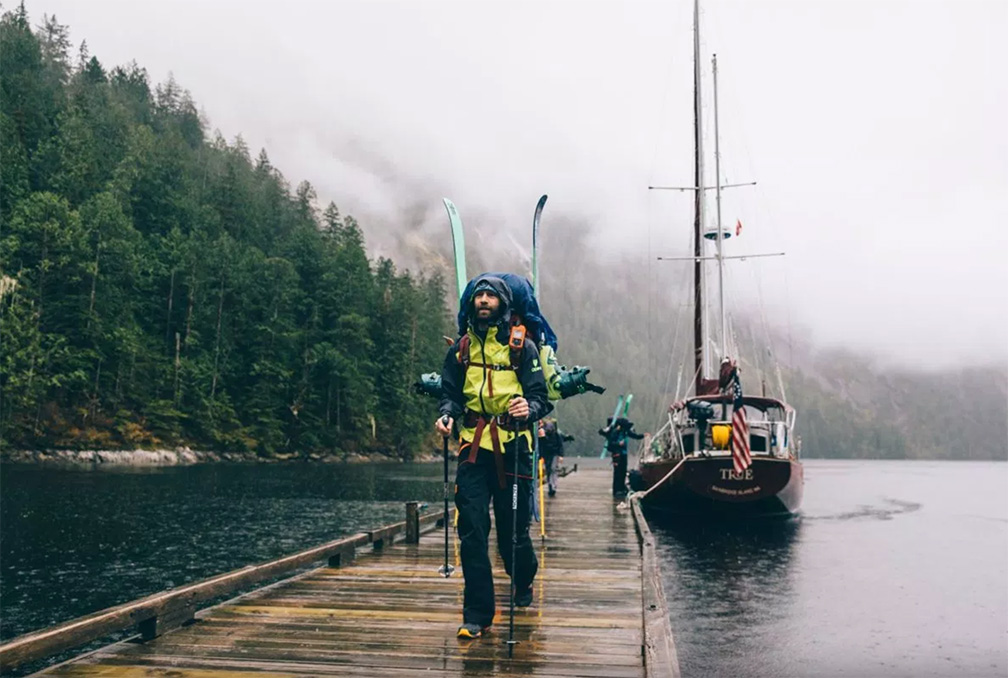 There’s skiable snow in British Columbia; and it turns out you can get there by boat. 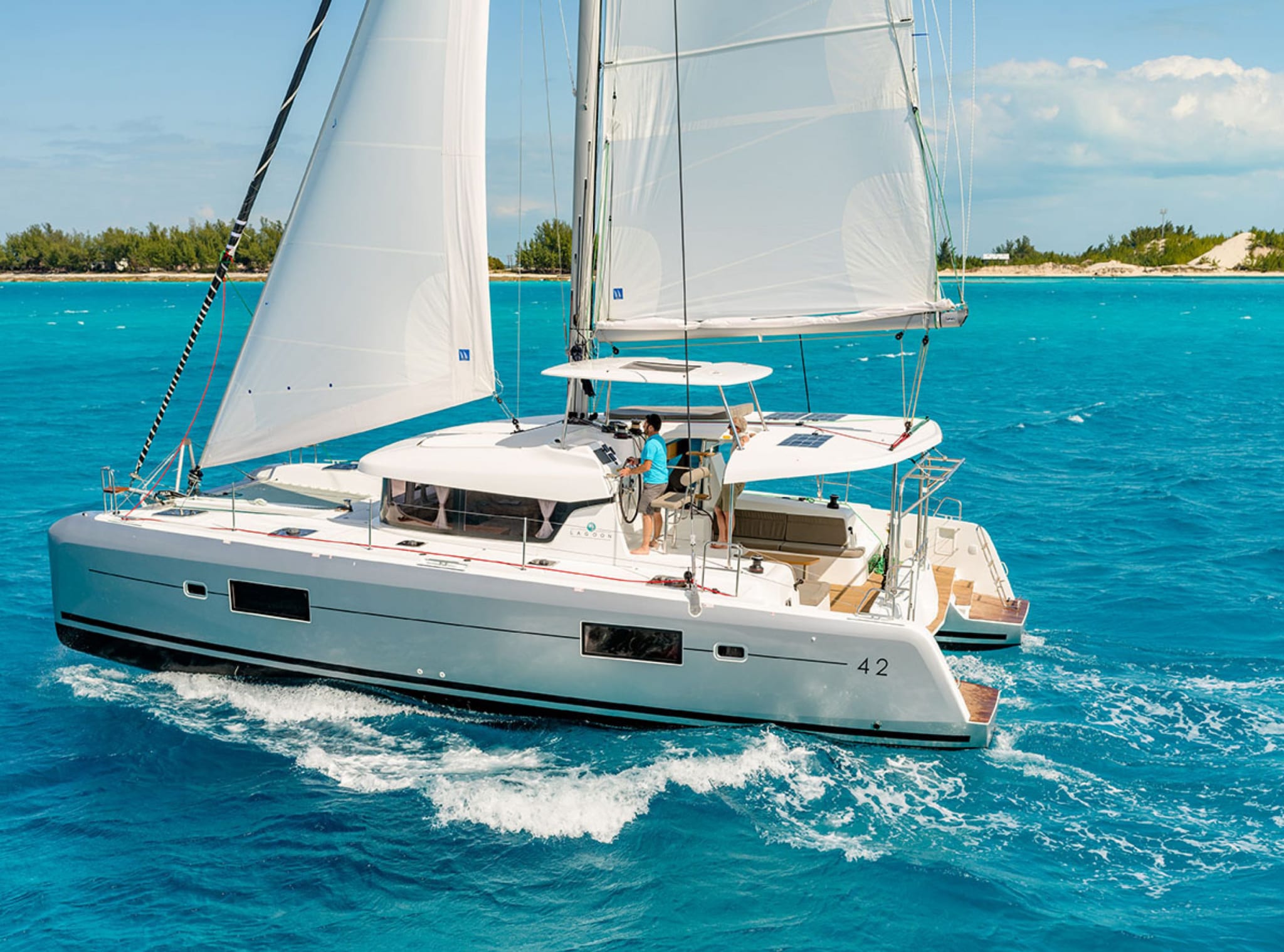 Looking for a warm winter getaway with some added adventure? During the winter-months we offer Ben’s captaining services to those looking for a sunny sailing getaway. 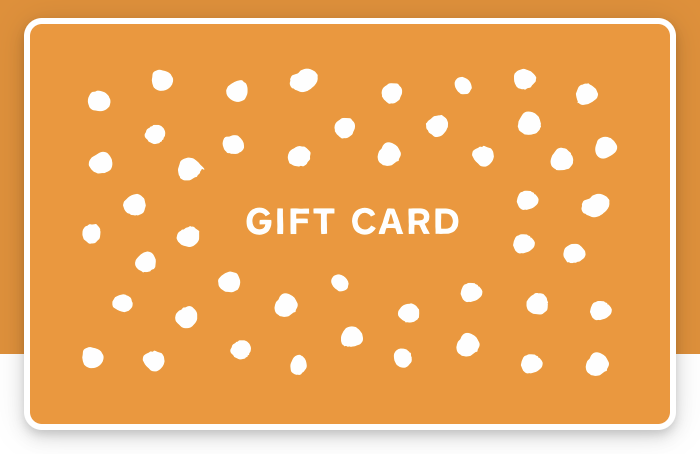 Our eGift Cards are easy to purchase, easy to give, and don’t expire. Give someone special the gift of sailing, some time on the water with friends and/or family. 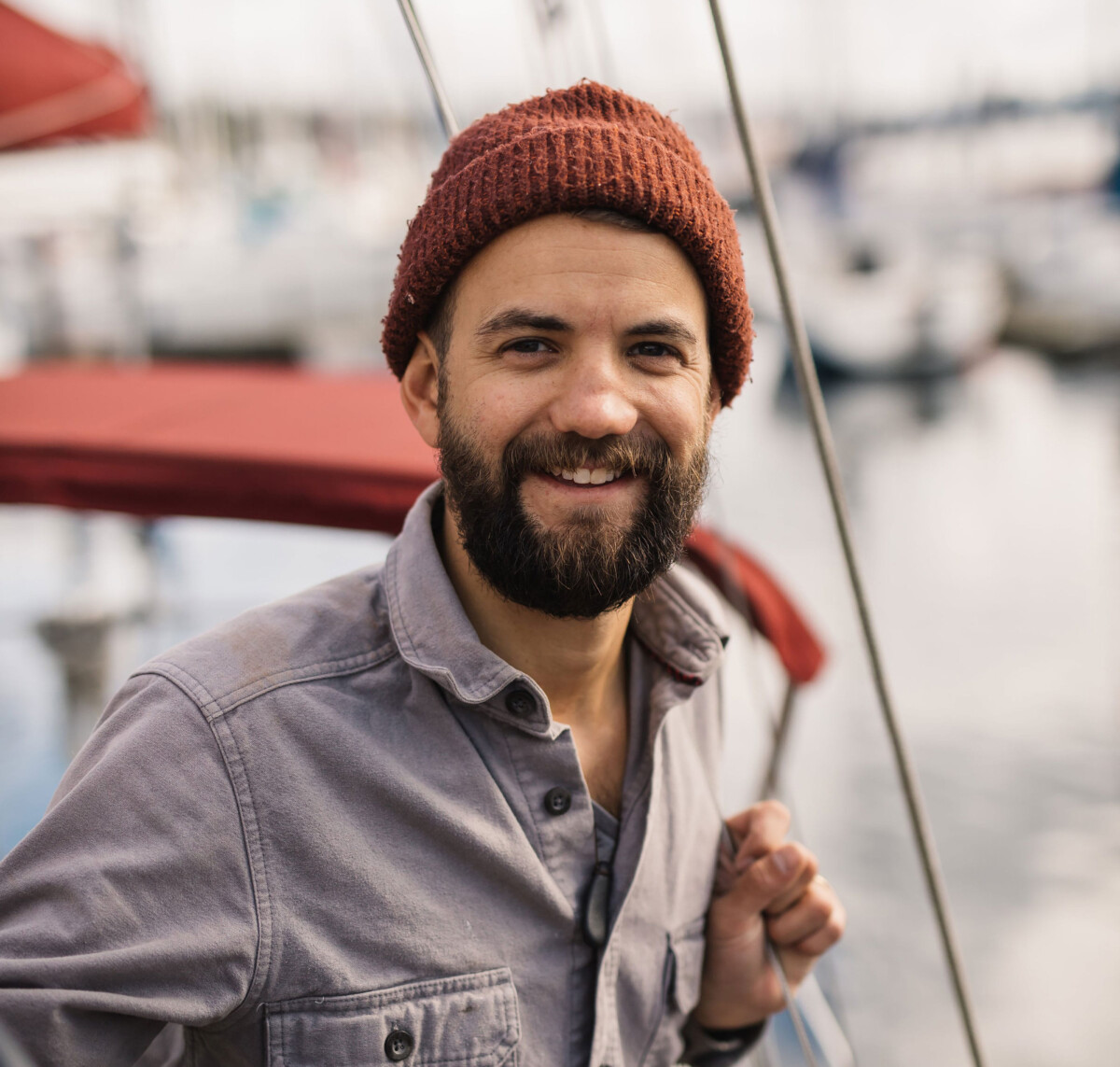 Ben first fell in love with sailing as a boy, visiting the Atlantic Coast of Florida, where his grandfather had 19ft daysailer.  Years later, following a summer spent as crew on a competitive and successful racing yacht on Lake Michigan, the deal was sealed.  He was hooked and has spent a good part of his adult life trying to find his way onto boats.  As owner, caretaker and captain of the beautiful classic sailing yacht, TRUE, there is little he loves more than being on the water and sharing the experience with others.

Ben has over 5,000 miles of offshore sailing experience including passages up the West Coast of the US from San Diego to Seattle, the North Sea from Sweden to Orkney, Scotland, the North Atlantic from Key West to Bermuda and the Caribbean from Annapolis, Maryland to the British Virgin Islands. In addition he has nearly a decade and many miles of experience sailing Puget Sound and the greater Salish Sea.

He is also a husband, father of two, and professional musician with the indie-folk band, St. Paul de Vence.

“Husband, father, captain of the sailboat True, indie-folk musician, life enthusiast. Ben is pure joy and endless energy, plucking crab from the ocean one minute and regaling us with stories about his grandfather the next. You meet a lot of people in this life. Some of them are ships in the night. Some stick with you. Some you borrow a piece from to make your own little boat just a little bit better.”

“My family and I had a special time on True. It was our sons birthday. Sailing to Blake Island was the perfect family adventure:  a private, beautiful island park. Captain Ben handles everything beautifully, and is super friendly. True is a gorgeous, classic, spacious and comfortable boat in any weather.  I loved the different trip options, we certainly will be booking again.  Highly Recommend!”

“What an amazing experience! Beautiful boat, great captain, a wonderful opportunity to take breathtaking photos, and enjoy time with friends. Thanks Sail Bainbridge!”

“Great time! True is a fantastic boat with plenty of style. Ben is a fantastic captain and a delight to be around. I cannot recommend sailing with him enough. Thanks for the great trip man!”

“I can’t say enough about how lovely this little getaway was. Coordinating with Ben to iron out the details of the reservation and get set up with a tour through Sail Bainbridge was a breeze. Ben was incredibly helpful, responsive and accommodating. The boat is beautiful, and exceeded my expectations. The bed alone was nearly more comfortable than my own! Waking up anchored at harbor was a new experience for me, and it couldn’t have been more idyllic. Our Sunday morning sail was the best way to cap the day and Sail Bainbridge made it especially enjoyable and easy. I would do it again in a heartbeat. Thanks for everything, Ben!”

“Perfect outing of sailing to Blake Island to explore and do a fun hike! We got to see the sea lions and porpoises while sailing! Our children said it was one of the best days of their lives! Doesn’t get any better than making memories like this!”

“Such a fun weekend! It is always nice to get a night out in the city, but to arrive by boat made for even more of a treat. Even in early spring, we were fortunate to get plenty of sun and winds at our back heading in –and we could not believe how close we came to the pod of orcas sailing home! That was definitely a highlight of the trip.”

“Excellent communication prior to arrival: Detailed instruction and advise, professional and welcoming. Ben made every effort to ensure a smooth stay. One night felt like a weeks holiday in terms of relaxation. The boat is in great shape and it felt like a floating home from home. We took a 2 hour sail before being dropped off for dinner in a local restraunt. Following the meal Ben ferried us out to the boat and then returned as arranged at 10am the next day to pick us up. Sunset and sunrise on the water in a calm and quiet harbour with a view of the Seattle skyline, just perfect! A great experience for the kids too; our 9 and 10 year olds even took turns stearing the boat while under sail and are still talking about it a week later. A great change from a hotel or house stay, I would recommend to anyone. ”

“The day was crisp, the snow peaked mountains surrounded us in a glimmering sea. Charismatic Captain Ben sailed us around Bainbridge to explore the sights. We were greeted by many doe-eyed seals on our voyage and will never forget this adventure. True was a gorgeous and classy boat, comfortable and spacious. My friends and I will be making this trip again!!”

“Ben was the perfect host. Engaging, funny, knowledgeable, generous and extremely easy to get along with, but just as adept at knowing when to give us space to enjoy the experience. I can’t recommend the experience highly enough.”

“My happy place – sailing with Captain Ben at the helm. Even on a wild and wintry day I love being wrapped up in one of the on-board fluffy blankets with my hat and gloves and scarf, curled up in a comfy corner of the cockpit watching the world go by. All those people on the huge Seattle Bainbridge ferry slipping past us must wish they could swap places even for a few moments.  The boat is so stable and Ben such a terrific captain that it’s easy to get lost in my own world quite oblivious to all the activity going on around me as we tack back and forth across the Sound, Mt Baker in one direction, Mt Rainier the other. And if the chill gets a bit much then below decks in a comfy chair beside the big upper level windows is a great place to hang out. Now I just can’t wait for the summer to lay about on the forward deck sipping a cool drink and dreaming my life away.”

“It was perfect. We’ll never forget our amazing stay on Ben’s gorgeous sailboat. He was an amazing host, extremely accommodating and helpful. The sailboat had everything we needed for a super-comfortable overnight stay. I proposed to my now-fiancée on the anchored-out boat at dusk and it was the perfect romantic experience. It couldn’t have gone better. I feel so lucky to have been able to work with Ben on the perfect romantic excursion. We’ll definitely be back.”

“Our sail to Blake Island was magical. Even with the city skyline in view, it felt like a whole different world. Because of Ben, we were able to relax, enjoy the trip and focus on the beauty around us. We were so thrilled when one of the kids shouted “whale!” Just off the boat spouted a humpback. We stopped to watch it a while, before heading off to anchor off Blake Island – a little green gem of a place, criscrossed with trails to wander and shores to explore. It was an amazing adventure. Thank you Ben and Sail Bainbridge! We’ll be back aboard soon.”

“From the moment you walk onto True you feel like you are stepping back in time to a place where everyday life just drifts away. This boating experience does not compare to many others. True is full of character that is beautifully enhanced by the enthusiasm and experience of the captain, Ben, who is happy to share his knowledge.

It would be an understatement to say that this boat is very comfortable. From a dining area with spectacular views to a relaxing lounge, True has everything you need to get away from it all. The galley along with a large bedroom and bathroom with fresh smelling hand lotion, are just some of the creature comforts onboard. Then you step outside onto the spacious deck and see nothing but the beauty that surrounds you. To be sailing on the Puget sound in a boat such as True can only be described as a wonderful experience.”

“As we left the harbor in waning daylight, I was amazed by the views all around: majestic Mt. Rainier, the electric Seattle skyline, and the expansive Olympic Mountains. Taking in all of these views from the comfort and security of True while the charming Captain Ben was at the helm was a treat that won’t soon be forgotten.” 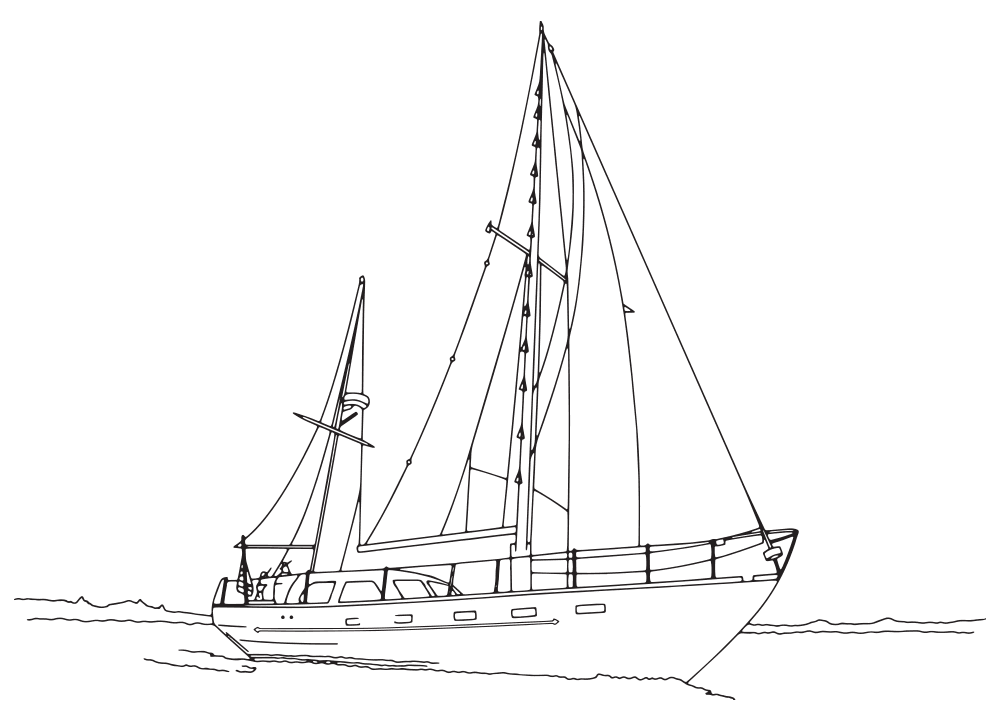 TRUE comes from the design desk of world-renowned naval architect, John Alden, who designed over 1000 boats, including the majestic schooners of the 1930s and 40s. His work, without question, represents great American boat design, and our 44-foot Pearson Countess Ketch, TRUE, is no exception.